The ice storms in the Lower Mainland last year prompted an inevitable crisis — highways were closed and food trucks couldn’t make it up here. Store shelves started emptying. This was compounded by the fact that the grocery store in neighbouring Houston had been closed for a few months and so everyone was shopping in Smithers. We were having a food system breakdown.

This was the hook for Laurie Gallant, a planner turned farmer with  Bulkley Valley Canyon Ranch and Hazelton Hops, to start a community conversation on food security in the Bulkley Valley.

She had already been discussing how to take on community food security organizing with Bulkley Valley MP Nathan Cullen, her friend of 17 years, at a New Year’s Eve party before the crisis hit. These weather events heightened the urgency for organizing how the Bulkley Valley can prepare for acute situations like the road closures as well as longer term food system resilience. Northern BC already experiences the highest food costs in the province, and anticipates both challenges and opportunities from climate change, as growing regions shift north.

The Bulkley River runs through the mountains, creating several micro-climates offering varied growing conditions for food producers. This is the traditional territory of the Wet’suwet’en First Nations who have stewarded the region’s food scape for millennia. About 50% of the population is Indigenous and the other half are settlers of various descents including a large proportion of Dutch and Swiss families.

Coming out of the winter food crisis, Laurie organized the Bulkley Valley Food Security Forum in May 2017 in Smithers. Her process offers a model for laying a foundation for a regional food security network.

Her first step was to pull together a core team of people already engaged in food security work across the Bulkley Valley to steward the process with her. This group was made up of a journalist, a representative from the Smithers Farmers Institute, a planner, and a director for the regional district’s agricultural committee, with additional support from elected officials at the local and federal level. 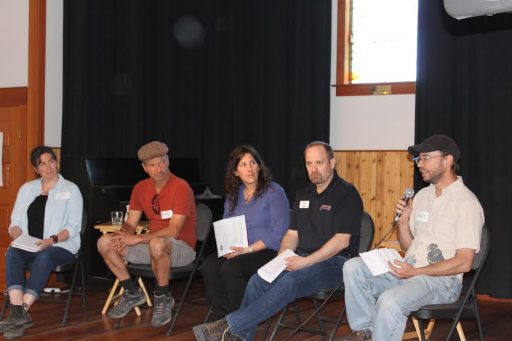 Laurie’s strong planning background informed the scope of the event:

I only wanted 30-40 people max and a three hour event. I wanted a small intense room of people who already had a background in the issues and who weren’t going to get caught up in the black hole of redefining the problem. We wanted to identify solutions and next steps. When you look at our invite list it’s a who’s who of experts in the food system. It wasn’t about getting everybody in the room but enough people to get traction.

First Nations involvement was flagged by MP Nathan Cullen in the beginning and Laurie invited  Wet’suwet’en Fisheries to present on the role of their fisheries in the regional food system. A chief attended to welcome and bless the event and David deWit, Natural Resources Manager for the Office of the Wet’suwet’en, attended as a participant. His presence meant a lot to the lead coordinators given the huge demands on his time.

To frame the conversation, Laurie invited panelists to speak at the forum’s outset, investing considerable time up front to interviewing each potential panelist to determine their fit for the event’s goals.

Whereas similar forums across the province tend to lean on non-profits and government officials to give panel talks, Laurie highlights the allyship of a key business, Bulkley Valley Wholesale Foods, who participated on the panel and who turned out to had already been aware and planning for emergency food security for the region for years. For example, the store commits to having 10 days worth of food in stock instead of 3 days, the more common retailer practice.

They also have a partnership with a local transport company to access their fleet of refrigerated reefer trucks to store the food in the event of a power loss. Additionally, the store uses an Edmonton-based distributor whereas other retailers in the valley use distributors in the Lower Mainland. What this means is that in the event of highway closures like the ones last winter, there is a a different inbound route option for food trucks to arrive from Alberta.

Laurie’s approach to facilitating the action planning aspect of the forum is another key innovation. As she describes, “We challenged each person to put down an action item that they personally would take the lead on and complete in the next twelve months. This might be something they already do in their work, but that we might not be aware of. This became the action plan.” These commitments were themed and captured in the expertly documented forum report including people’s names and organizational affiliations providing accountability and transparency.

Other energizing ideas to come out of the forum included the need for smaller scale community food storage infrastructure such as root cellars and food caches. Groundbreakers, a local non-profit who promote sustainability through gardening, farming, and eating locally-grown foods, shared their vision of a root cellar or food cache in every new building. Participants took this up and explored how local government policy could enable this kind of local food infrastructure — exactly the kind of sophisticated conversation the organizers hoped for. 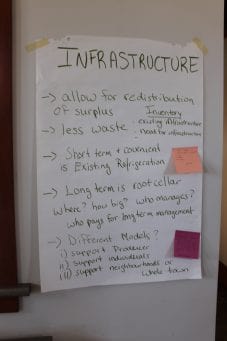 Laurie’s background as a planner is evident in her analysis of how this process needs to feed into policy making:

Trying to engage the policy makers and bringing awareness to them- that’s a longer term goal, which is why I need the MLA, MP, regional district, and town councillors engaged in this conversation. These ideas and goals need to be reflected in Official Community Plans and regional development plans so they can influence long term thinking. You need a 5 or 10 year lead in for this kind of change. We need a  vision everyone can start aligning towards.

Next steps will be to secure funding to further the action planning and build on the amazing momentum from the forum.

It was amazing how quickly this project came together and how quickly people jumped on board and stayed really positive. Instead asking why we don’t have a plan yet and pointing fingers, we just did it and that’s the spirit of this place, it’s incredible – it matches the beautiful scenery.