Update March 29, 2017:  we’re checking back in with  Burnaby Food First (BFF) to learn how they’ve continued the conversations initiated at last June’s Food Forum. BFF is a group of community members and local agencies working together to bring food security to Burnaby. Over the past year Grant Rice has had a contract (concluding shortly) to coordinate activities and that’s brought capacity and energy to this work.

When we last checked in with Grant Rice of Burnaby Food First in June 2016, they had just published Local Food Security: Turning Policy into Action in Metro Vancouver and were organizing a food forum. The forum brought together over a hundred people to discuss food security in Burnaby. Since then, BFF hosted some intimate community conversations on a few key themes.

For many within the BFF network and beyond, the entry point to the dialogue on food security is inspired by a desire to grow and access locally grown food.  BFF hosted a well attended event on community gardens with Michael Denhamer of Can You Dig It and Jason Hsieh, who helped the Vancouver Parks Board implement its Local Food Action Plan. They described the process of creating community gardens on public and private lands, identifying barriers and paths to success. Using large city maps, groups were asked to identify potential sites on city parkland and then used the City of Burnaby’s web map in aerial and street view to explore them further.

Grant was pleased by the trajectory of the next discussion on food waste which featured Rubina Jamal and Scott Rowe from North Shore Table Matters. The conversation explored government’s role in creating policy and programs, as well as an educator and communicator in changing our food culture. There was enthusiasm for a national food policy that addresses food waste and a new national social program providing a guaranteed annual income for all. 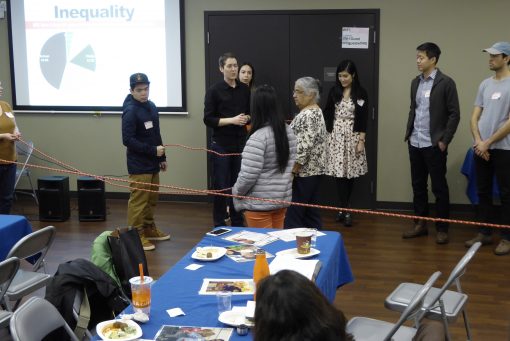 The final event dove into the theme of income and food insecurity and featured Trish Garner, a community organizer with the BC Poverty Reduction Council (featured in our Homegrown series on poverty and food insecurity in BC) and Amy Weeks, Food and Education Coordinator at the Greater Vancouver Food Bank. Participants discussed BFF signing onto the BC Poverty Reduction Plan and  and the need for citizens to advocate for political action on poverty in the upcoming election, including attending all candidates meetings and working to get the vote out.

What are Grant’s reflections after guiding and participating in these conversations over the last year?

“Broadly speaking I see two groups ready to engage on food security- there’s those who are committed to increasing our food sovereignty- they’re passionate about protecting the ALR in Burnaby, growing more of our own food, and supporting our local farmers. Then there’s the social service agencies who represent and serve people who are food insecure, like the food bank and neighbourhood house.

There’s much overlap here of course and many potential connections to grow between these groups.  But personally I keep returning to something that Gerry Kasten (also quoted in this Homegrown Story) said last year at the Food Forum, “Hunger’s not a food problem, it’s an economic problem.” We need consistent and strong action on all fronts, but I think the top priority needs to be on advocating strongly for a poverty reduction plan.” 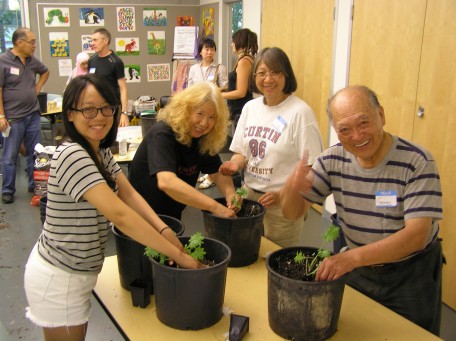 Burnaby Food First (BFF) is a longstanding food security network in the province, founded in 1997 by members of the Eastburn Interagency Council. The impetus for creating the network was a shared desire among its founders to see more healthy food made available to people on low incomes.

The intertwined issues that lead to food insecurity are complex. It makes sense that a grassroots response like BFF undertakes multiple strategies. Food skills workshops and community outreach are a mainstay but as food policy becomes more embedded in local government, organizations like BFF are finding a seat at the table with municipal officials and playing a larger role in convening stakeholders across sectors.

BFF is hosting its second ever public forum (the first was in 2010) on June 8 titled Burnaby Food Matters: Food For Today & Food for the Future. The forum brings together non-profits, service providers, local government, farmers and citizens working to address food security in Burnaby.

Grant Rice, a contractor with BFF, is coordinating the forum and also authored the recent report Local Food Security: Turning Policy into Action in Metro Vancouver. The report takes a multi-level view of food policy development at the national, provincial, and local settings with food action and policy recommendations for Burnaby.

Invitations like these show that a valued relationship is growing with municipal government.  After an earlier meeting with city staff Grant reflected:

BFF had a great meeting with a wide group of city staff from land use planning, social planning, parks, and purchasing about food security topics. With BFF at the table, the questions we ask can trigger new conversations amongst city staff. Support is working its way up the ranks. It is making its way up to senior and elected levels of government and that is the direction it needs to go.

Grant also points to the strength of the BFF organizational model which is made up of a central steering committee and a series of action teams who do the hands-on work in areas like fundraising, communications, events and education, and governance. Building up the volunteer capacity, public profile, strategic direction, and relationships required to sustain the work of BFF has clearly required perseverance but is paying off. 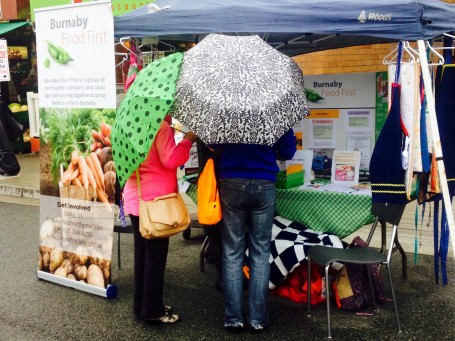 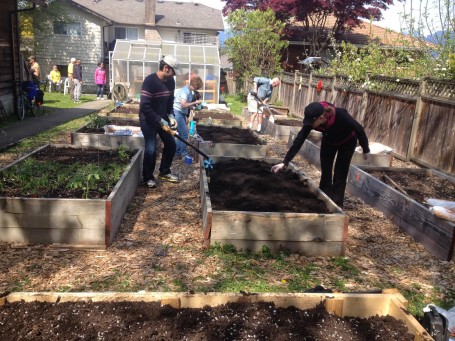 For more information about this initiative