About the so-called* BC Food Security Gateway Community of Practice

The Gateway Community of Practice convenes folks throughout the traditional Indigenous territories of so-called* BC who share a passion and practice around work centering:

We gather monthly over Zoom and welcome anyone who connects with these passions and areas of practice.

If this sounds like you, we invite you to Join the CoP! 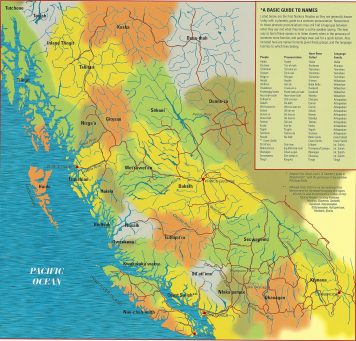 We refer to the colonial place called British Columbia as so-called BC recognizing that these are Indigenous territories belonging to 198 distinct First Nations and that the majority of these territories remain unceded sovereign Indigenous land. It is on these territories that the collective food work held by the folks who come to the CoP happens.

Through our work curating the @BCFoodSecurity news feed, we’ve been gratefully following the work of Indiginews. We appreciate what Kelsie Kilawna, Indiginews Cultural Editor and Senior Aunty, recently offered on the use of so-called when talking about Canada:

“At IndigiNews we spend a lot of time discussing language, and this week’s hot topic was our use of “so-called…This week I took some heat on social media for writing ‘so-called Canada’…we talked about  the energy we’re bringing to the world by using “so-called” in this way. We know that we are witnesses to land theft and its impacts, and we want to honour that. At the same time, we’re not aware of a clear alternative to refer to this body of land we refer to, in colonial terms, as Canada. We decided to refer to Canada simply as Canada for now, while continuing to centre Indigenous place names and language as much as possible, and providing critical context about colonialism.

It’s important to us to always name the traditional territories our stories touch on — that way folks from the area know whose territory they are guests on.”

Our November session was facilitated by guest Nicole Wires of the White Noise Collective (WNC) who guided us through an experiential workshop in embodied practice for staying grounded, connected, and committed to racial justice. The workshop was developed in partnership between WNC and research by Kat Roubos and responds to Robin DiAngelo’s work on White Fragility. WNC organizes on Ohlone territory and moves resources raised from workshops to three BIPOC led community based organizations, including the Sogorea Te Land Trust, which facilitates the return of Ohlone land to Indigenous people.

Our gratitude to Nicole and the over 30 participants who were able to come together for this offering including a number of people joining for the first time, longtime CoP members, and folks who participated in Unpacking White Privilege in the Food Movement with the hua foundation in 2018 where Nicole offered the WNC’s White Women in Food Justice and the Buffer Zone workshop. 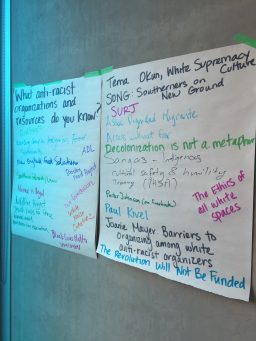 November’s workshop connected us to our ongoing CoP conversations on anti-racism and dismantling settler colonialism and white supremacy in food work and systems, especially September’s session around building stamina for staying with this big lifelong work.

In our time with Nicole, we were invited to connect and listen to our bodies to deepen awareness of how white, settler, and other fragilities manifest. The intention of this work is to understand these experiences and patterns, including our impulses to shy away from them or feel shame around them, in order to build stamina and resilience for anti-colonial and anti-racist work and relationships.

We were each invited to explore our personal patterns of defensiveness, activation, and fragility around race and colonization, while being encouraged to recognize how systems of power are maintained by the accumulation of these individual patterns. The end goal of this work is not only to be “better” or “less fragile” individuals, but to understand how avoidance, defensiveness, anger, irritation and fear can be barriers to acknowledging and addressing harms across differences of power.

In this exploration, we worked with memories of past experiences of fragility, noticing what thoughts, feelings, sensations, and emotions arose in our body as we remember. We also created space to acknowledge numbness and lack of sensation, understanding even a perceived absence of sensation has information to tell us about our nervous systems. In an activity from the Theater of the Oppressed, we moved into shapes with our bodies that expressed our own experience of our memory, and were invited to notice patterns in our collective shapes.. Nicole guided us in some grounding skills to settle our activated nervous systems and left us with a mini teach-in on the nervous system and trauma, mapping how our perceived threat reactions align with white and other fragilities. 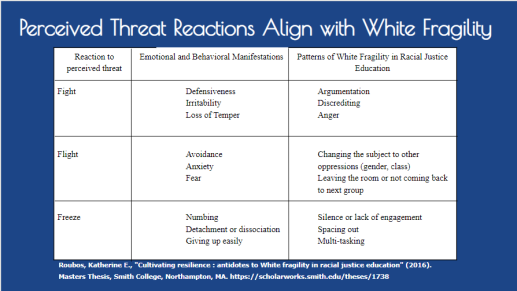 It was a beautifully generative and beginning offering with invitations for us to further reflect:

💻 Slides from the session

✒️ Sign up to hear from the White Noise Collective

This entry was posted in community of practice, Featured Post. Bookmark the permalink.