Hunger in wealthy Canada and the Right to Food: A conversation with Graham Riches

Our Community of Practice (and guests from municipal governments and health authorities) came together for a conversation with Graham Riches a few weeks ago. Graham has been interrogating food banks since they first came to so-called Canada – a problematic transposition of an American model – in the early 1980s.

He remembers when the first food bank opened in Regina and has been a critic ever since. He’s a strong proponent of a Right to Food framework, an international obligation Canada ratified as part of the 1976 UN International Covenant on Economic, Social, and Cultural Rights. Article 11 specifically names the Right to Food.

Food is a Right

As charitable proclivities to donate to food banks have been in hyper-drive in response to COVID-19, including by the provincial and federal governments, Graham continues to name a deep concern around how food banks prop up a broken food system in a pandemic context. He argues they are distracting us from the poverty reduction and income security policies it would take to uphold government’s responsibility to the Right to Food and progressively realize food security for all.

He took us through what Canada’s obligation is under the 1976 International Covenant. What we learned:

Graham invited us to think about the role of public health and suggested organizing strategies like engaging the likes of Dr. Bonnie Henry in this strategy for Right to Food advocacy. He emphasizes that “domestic hunger” in wealthy BC and Canada is an income problem, not a food problem. For Indigenous peoples food insecurity is also wealth derived from stolen land, “any time land has been taken rights have been taken; colonization doesn’t respect the right to food”.

Folks on the call generated a number of questions for Graham in a “Celebrity Interview” screen grabbed below. 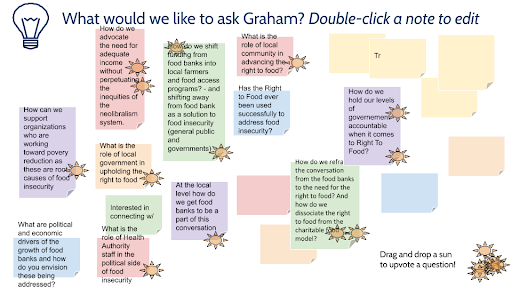 Some of what we’re left ruminating on from the conversation:

Explore some of Graham’s writing:

How Food Banks Prop Up a Broken Food System

Is feeding ‘left over’ food to ‘left behind’ people really the best we can do?

Can UBC do better to feed its food insecure students?