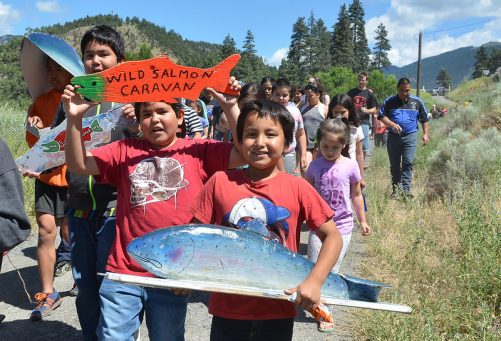 The Wild Salmon Caravan, led by Dawn Morrison and the Working Group on Indigenous Food Sovereignty is  an example of the resurgence of Indigenous governance. Photo by Murray Bush Flux Photos

The Gateway convened a conversation on May 8 with the local government and food policy community of practice (CoP) to explore the question: What is Indigenous governance and how does it relate to our work of moving food policy ahead with local government?

We invited two leaders in this work to this online conversation with the CoP; Jolene Andrew, Witsuwit’en Territory, who works as the Aboriginal Community Developer for Mount Pleasant Neighbourhood House in East Vancouver, and, Dawn Morrison of the Secwepemc Nation and Director of the Working Group on Indigenous Food Sovereignty (WGIFS).

“Indigenous leadership, approaches, and principles can harmonize and guide us to be starting with the land. We all come from the land, we all depend on the land for our food systems.” -Jolene Andrews

Jolene guides organizations to develop reconciliation strategies grounded in an appreciation for Indigenous knowledge and technologies. One example is the Resurfacing History Project: Land and Life in Mount Pleasant project, where she supports Indigenous people with experience in land-based teaching to facilitate community dialogues. 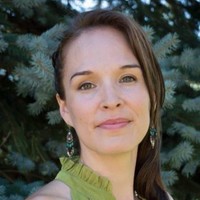 She also supports urban Indigenous women to nurture their relationships with medicine and the land.  Gathering food and medicines on public land means interacting with groups like the Vancouver Parks Board, who recently adopted a reconciliation strategy. It also raises questions for Jolene of how urban Indigenous people relate to the governance traditions of the Musqueam peoples on their traditional territories, “When we spoke with Musqueam protocol, they expressed teachings and stories that date back to the ice age.”

These projects express governance traditions on a more intimate scale- the work of growing reciprocal relationships with land and community. In turn, Dawn emphasized some of the powerful Indigenous governance strategies based on establishing title and rights that originated in her traditional Secwepemc territory.

The Canadian Constitution Express, led by the late George Manuel, resulted in Aboriginal title and rights being entrenched in the Canadian Constitution in section 35.1.  The Indian Child Caravan mobilized communities to respond to the high numbers of children removed from their homes. The stand-off at Gustafson Lake, stemmed from longstanding conflict over Aboriginal land occupied by non-Aboriginal settlers without having first signed treaties. It was the Elders and sovereigntists in Dawn’s Neskonlith/Adams Lake Secwepemc community, who led the Gustafson Lake standoff, who told her,

“Food will be what brings the people together”.

We started this conversation by acknowledging that food was used as a weapon of oppression and genocide against Indigenous people. Peoples were removed from the lands that nourished them. Children were deprived of food as part of ‘nutritional experiments’ in residential schools. The legacy of trauma is present and ongoing, and we honour the emotional labour of leaders like Dawn and Jolene by coming to share their teachings and experiences of with us.

As facilitators and participants in this community of practice, we come to this conversation with degrees of privilege.   It takes courage to show up and be present for these conversations, to feel the discomfort, the fear, the anger and sorrow. 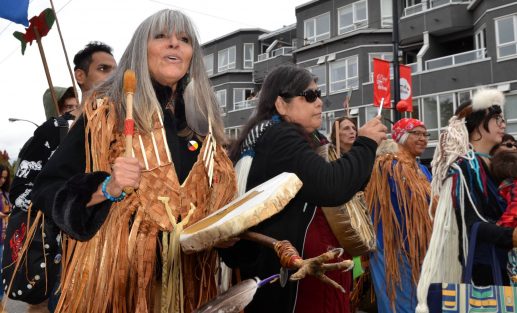 Dawn at the 2017 Wild Salmon Caravan Parade in Vancouver

Responsibility, Dawn emphasizes, is at the heart of Indigenous governance. She expressed many ways settler friends and allies who are working towards policy change in our food systems can fulfill those responsibilities.

“While we want everyone to express some level of indigeneity through direct relationship with the land, it’s not enough. With ongoing oil extraction, pipeline expansion, tailing ponds spills, fish farms in the Broughton Archipelago, and the increasing impacts of climate change in the food system, we need settler friends and allies to mobilize to action. Indigenous people aren’t just doing this for ourselves, everyone benefits. It’s the heritage of humanity that’s at stake.”

At the BC Food Security Gateway, we’ve committed to reflecting on how the resources, stories, and news we curate reflects Indigenous worldviews. After this conversation, we’ve returned to the Truth and Reconciliation Commission recommendations which are deeply relevant for those of us working across the public sector in community, health, government, and education.

The full report is a must read  and provides us with direction on how we can begin to fulfill the responsibilities that Dawn and Jolene emphasize is at the heart of Indigenous governance.

This entry was posted in Culture, Indigenous Food Systems, Uncategorized. Bookmark the permalink.

If you have an idea for a homegrown story, please contact us.