We were honoured to be with Uncle Mike to open the Gregorian new year and be with winter’s invitation to circle up, reflect, rest, regenerate, and listen.

Conversations with Uncle Mike often include him sharing the traditional knowledge of his community and stories of his many years of activism and teaching. He’s an Elder at Thompson Rivers University and for the Wild Salmon Caravan and Indigenous Food and Freedom School. 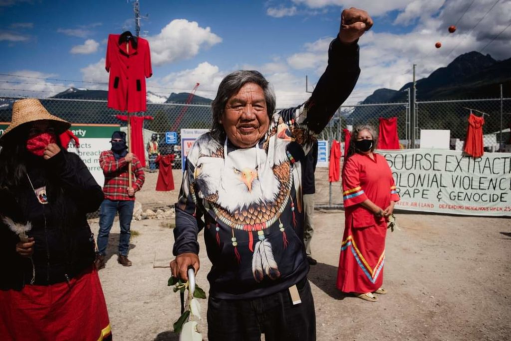 The circle gathered with Uncle Mike sharing his thoughts around LandBack movements, taking care of the land, and what gets in the way of just and compassionate action. As Nicole Davies states in the piece Indigenous agriculture is a Land Back issue, “When we talk about food sovereignty, we are talking about Land Back.”

🌿 Decolonization is not a metaphor Eve Tuck and K. Wayne Yang

🦬 Briarpatch: The Land Back Issue

🐞 LAND BACK! What do we mean? Ronald Gamblin, 4RS Youth Movement

🎧 Landback, Then What? Canadalandback Podcast

Here’s what Uncle Mike offered that got some initial reflections churning: 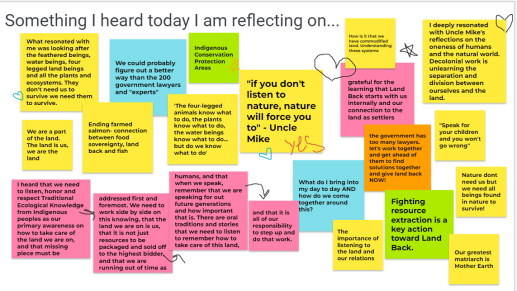 🟨 Looking after the feathered beings, water beings, four legged land beings, and all the plants and ecosystems. They don’t need us to survive, we need them to survive.

🟦 We could probably figure out a better way than the 200 government lawyers and “experts”.

🟨 Ending farmed salmon. The connection between food sovereignty, land back, and fish.

🟨 “If you don’t listen to nature, nature will force you to.”

🟨 How is it that we have commodified land. Understanding these systems.

🟪 Land Back starts with us internally and our connection to the land as settlers.

🟨 Oneness of humans and the natural world. Decolonial work is unlearning the separation and division between ourselves and the land.

🟨 “Speak for your children and you won’t go wrong.”

🟧The government has too many lawyers. Let’s work together and get ahead of them to find solutions and give land back now!

🟨 The importance of listening to land and our relations.

🟩 Fighting resource extraction is a key action toward Land Back.

🟨 Nature doesn’t need us but we need all beings found in nature to survive.

🟨 Our greatest matriarch is Mother Earth.

🟪 We need to listen, honour, and respect Traditional Ecological Knowledge from Indigenous peoples as our primary awareness on how to take care of the land we are on, and that missing piece must be addressing first and foremost.

🟪 We need to work side by side on this knowing that the land we are on is us, that it is not just resources to be packaged and sold off to the highest bidder and that we are running out of time as humans.

🟪 When we speak, remember that we are speaking for our future generations and how important that is. There are oral traditions and stories that we need to listen to remember how to take care of this land, and that it is our responsibility to step up and do that work.

Some of what else emerged in the conversation included Indigenous Protected Conservation Areas, land trusts, and voluntary land taxes as some strategies folks were aware of and curious about within the LandBack movement and conversation.

We also heard stories about being afraid to harvest in traditional territories that have become “private property” under colonialism; working with colonial municipal government to advocate for LandBack; the violence of and resistance to old growth logging; the importance of traditional governance; and, the need for political action and advocacy alongside engaging with growing, harvesting, hunting, and fishing for food.

On the car ride home with Michelle Tsutsumi after our CoP session, Uncle Mike said that “this all needs to be shared, especially with kids, because things need to be known,” and, that people use the defence that they “weren’t there,” and that is why the harm continues to happen.

📘 21 Things You May Not Know About the Indian Act by Bob Joseph.

We’ve included these recommendations along with the other places to learn about LandBack we’ve been gathering below.

Here are just some of the many, many places to learn about LandBack and Indigenous Food Sovereignty we’ve gathered for the Gateway, growing with those mentioned by the collective in our January circle with Uncle Mike.

Indigenous protected areas are the next generation of conservation

Turning Food into a Weapon in the Battle against Colonialism

Thousands of hectares to be transferred to First Nation near Nanaimo

Mission, BC and the province sign land deal with local First Nations

Indigenous agriculture is a Land Back issue

How Canada can give Land Back

Home is where the land knows my name

This entry was posted in Uncategorized. Bookmark the permalink.