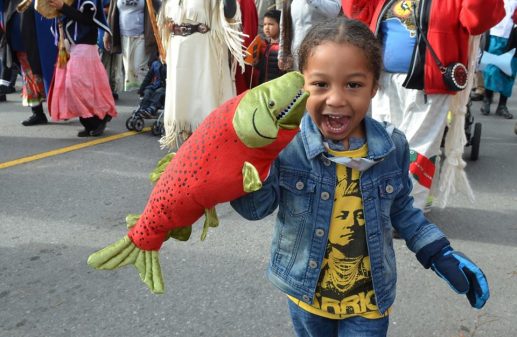 The Gateway first published this story on the Wild Salmon Caravan in 2016 and this update last year. The event is now entering its fourth year- the  dominant run of the sockeye – to celebrate the spirit of wild salmon and call them home to the streams of rivers of BC.

This year the Wild Salmon Caravan happens September 22-29, 2018 and will travel from unceded territories of the xwməθkwəy̓əm (Musqueam), Skwxwú7mesh (Squamish), Stó:lō and Səl̓ílwətaʔ/Selilwitulh (Tsleil-Waututh) Nations to the unceded territory of the Secwepemc (Shuswap) People at the Adams River.

For thousands of years, the wild salmon have been our most important Indigenous food, and cultural and ecological keystone species in BC. They are an indicator of the health and integrity of the Indigenous land and food system on which the health and functioning of the entire agri-food system is based. They feed the entire Pacific Temperate Rainforest as well as many species including the bears, the wolves, the eagles, and our families and communities.

There is a long history of caravanning to enact Indigenous governance strategies in traditional Secwepemc territory. In a recent story on Indigenous governance, Dawn identifies the Canadian Constitution Express, led by the late George Manuel, which resulted in Aboriginal title and rights being entrenched in the Canadian Constitution in section 35.1.  The Indian Child Caravan mobilized communities to respond to the high numbers of children removed from their homes.

The Wild Salmon Caravan is a manifestation of Indigenous food sovereignty. It affirms that  inter-tribal relationships are the foundation of Indigenous fisheries and trade knowledge systems. It’s  deep purpose is to transform the darkness surrounding the industrial storm that is killing wild salmon.

Everyone is invited to come out in colourful and creative expressions of love for wild salmon in parades, banners, posters, music, storytelling, regalia.  The Caravan Facebook page is abuzz with arts builds workshops as communities prepare for the mardi-gras style parades.

Community food groups are eager for food justice, and truth and reconciliation, and giving freely their time, energy, ideas and efforts to support the Wild Salmon Caravan.   Last year Bonnie Klohn of the Kamloops Food Policy Council said of the KFPC’s participation,

The Wild Salmon Caravan is an important entry point for us to think about the interconnected nature of our food system. Salmon connect all of us in some way, because it depends on the health of numerous ecosystems and biocultural regions. They remind us of the fragility and complexity of our food system and that we need to work together to protect it.

This year the KFPC is contributing to the organizing efforts of the people of the Adams River, in Chase BC where the salmon return.  They also hosted Chief of Skeetchestn community, Kukpi Ron Ignace  at the KFPC’s monthly network potluck to share a traditional Secwepemc story of the Trout children. 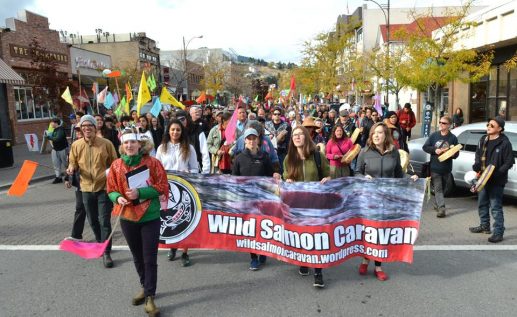 You are warmly invited to participate! #wildsalmoncaravan