When Community Food Security Isn’t Enough: Repairing the Poverty ‘Bridge’ in BC | Part I

To start off the 2017 Homegrown Story series, the Gateway is taking a departure from our usual approach of profiling innovative food security programs from across the province and digging into the issue, and solutions, to the widespread food insecurity and poverty plaguing BC. To do so, we spoke with Dr. Valerie Tarasuk, Professor at the University of Toronto and Principal Investigator with the PROOF: Food Insecurity Policy Research program as well as with Trish Garner, Community Organizer with the BC Poverty Reduction Coalition.

The fable depicted in the video above, a well-used teaching tool of the BC Poverty Reduction Coalition (BCPRC), offers a metaphor by way of the broken bridge for working upstream and interrogating the root causes of poverty.

The food and anti-poverty movements are beginning to intersect in unprecedented ways remarks Trish Garner, Community Organizer with the BCPRC, as recognition grows that charitable and otherwise ad hoc responses to a provincial hunger crisis are insufficient.

“We see food insecurity as an issue of income insecurity and hunger as a symptom of poverty,” explains Trish. After years of advocacy and a worsening of the crisis across the province, she’s finally noticing a more widespread acceptance of this reality, “It does feel like we’re in the middle of a shift where more people and media are talking about food insecurity – there is a new appetite.”

Dr. Valerie Tarasuk helps situate what is happening in BC with the rest of Canada in her role as a Professor at the University of Toronto and Principal Investigator with the PROOF: Food Insecurity Policy Research program. She explains, “The situation is getting worse in BC. Over the time for which we’ve got data, we can see an increase in food insecurity on par with the national prevalence.”

Valerie describes food insecurity as “a very direct measure of material deprivation: someone who is worried about not being able to feed themselves and their family, somebody who skipped meals because they can’t afford food, and at its most extreme end, food insecurity manifests as people who go whole days without eating because of a lack of food or money for food – [this is] somebody living in significant poverty.”

And so, what would it take to work upstream and rebuild the bridge in BC? Trish and Valerie are aligned in their call for public policy changes. As Valerie puts it:

There’s ample evidence to suggest that public policy interventions that improve the financial circumstances of people at the bottom end will improve their food security. Everything we know says if you want to drop the probability of somebody saying that they are struggling to feed themselves and their families, the way to do that is to improve their financial security.

“BC is the most unequal society in Canada,” adds Trish, “that affects our health from the stress of living in that situation. We’re all paying for that. It costs us 8-9 billion dollars per year to deal with the costs of poverty in health care, criminal justice, and so on, but only 3-4 billion to implement a poverty reduction plan. It makes economic and moral sense. We can afford it, we have the money.”

Trish and Valerie both lament that BC is the only province in Canada without a comprehensive poverty reduction plan. To fill the void, BCPRC developed its own Poverty Reduction Plan for BC. The plan itself has 7 pillars ranging from raising social assistance rates and the minimum wage, introducing living wages, and addressing the barriers and financial burden of other social goods including housing, childcare, education, and health care.

The living wage is one part of the good jobs pillar of the BCPRC plan, which includes adopting the living wage as an employer responsibility and increasing the minimum wage to $15 as the necessary public policy change. The move to living wages is gaining momentum in BC as increasing numbers of employers adopt them. Trish explains that a living wage “actually looks at cost of living in a community and advocates for employers to pay a wage that would actually meet that.”

The Living Wage for Families campaign has an online calculator to help determine the living wage rate for different parts of the province which also incorporates benefits coverage into the equation, “You can see some regional differences in a living wage when you look at higher food costs in northern communities and one like Cranbrook and Revelstoke that cross mountains.” Contrasting a living wage for Metro Vancouver compared to the minimum wage as an example, BC’s minimum wage sits at $10.85 – one of the lowest in Canada – whereas a living wage is almost double at $20.64.

Both Trish and Valerie are cautious about over dependence on living wages as a poverty reduction strategy. Valerie qualifies that “a living wage is fine if somebody has full time work, but many employed people struggling with food insecurity are not working full time…if we increase wages but somebody is only getting 10 or 20 hours a week, it’s not going to make enough of a difference in their income. That’s where there’s a need for something else and in the context of food insecurity, we get talking about other models like a basic income.”

Valerie describes a basic income as “an income floor that guarantees an amount of money for people irrespective of whether they are working or how much they’re working – it’s just a basic income.” She likens it to the public pension seniors receive once they turn 65 regardless of how they spent their life to that point, “they’re entitled to a guaranteed annual income and that income creates a floor. Most seniors end up with incomes higher than that guaranteed base but everyone at least gets a minimum amount…We see when low income adults turn 65 their rate of food insecurity drops by more than half.”

Although a basic income offers a better option for those with precarious employment, it is no “pie in the sky” according to Valerie who says we shouldn’t think “we can only solve food insecurity if we have this brand new, completely different approach to income support.”

For Trish, the benefits of a basic income approach are that it would “avoid stigma and access issues that go along with the current income assistance program.” However, she is  concerned that introducing a basic income program for BC could mean cuts to other necessary supports, “I worry about putting our full weight behind it until we know more. When you reduce it all down to income, what else do you lose? We haven’t been able to provide adequate income through the welfare system – rates have been frozen at $610/month for 10 years – so why do we expect to provide an adequate income through basic income?” As one Canadian example to draw inspiration from, Newfoundland and Labrador was able to decrease food insecurity by 50% by increasing welfare rates.

Valerie agrees that “if BC simply offered social assistance rates that were in sync with the cost of living, there wouldn’t be a need for basic income for people on social assistance – they would have one.” She draws on evidence from the last decade, “there was a glimmer of public policy work in BC between 2005 and 2007 when there was a one time increase in social assistance and we can see a small improvement in food security.”

With public policy as key, what then is the place of community food security work in affecting individual and household food insecurity and poverty reduction?

In two weeks, we’ll publish what Trish, Valerie, and some of you have to say in response to this question as Part II of this series. 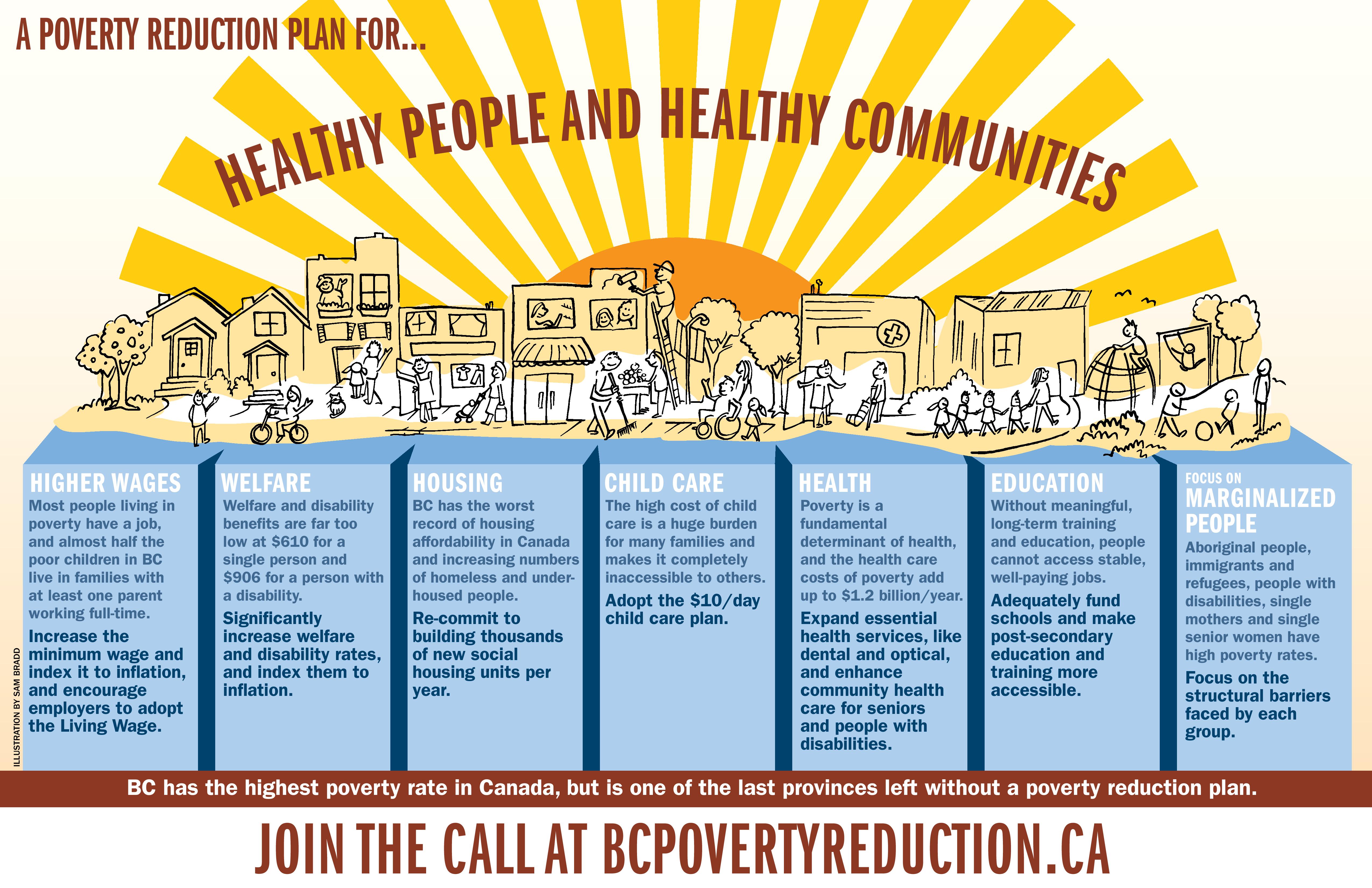 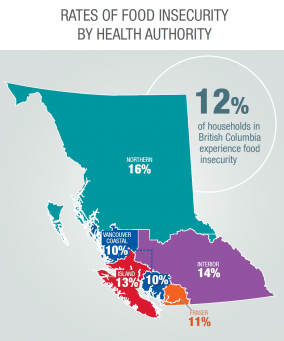 For more information on this initiative