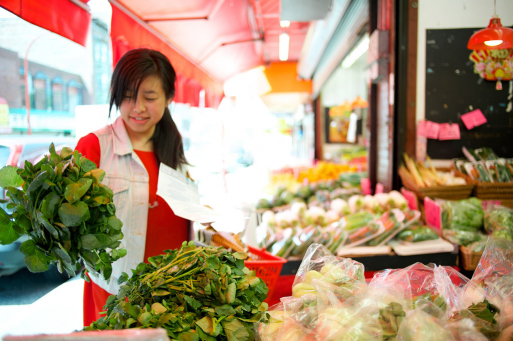 These are not familiar terms to those working in mainstream food security in BC. This language is, however, beginning to get out there thanks to the work of the Hua Foundation. This youth-driven organization nestled in Vancouver’s Chinatown is stewarding a conversation about culture, history, knowledge, and discrimination within the local food movement.

The Chinatown community is concerned about the disappearance of the long established greengrocers, fishmongers, barbeque meat stores and butcher shops, Chinese dry goods stores, bakeries, and restaurants throughout the neighbourhood. The Hua Foundation calls these small businesses ‘cultural food assets’; spaces that maintain and share culture through food.

They embarked on a project to investigate what was happening in the neighbourhood. The result is the Vancouver Chinatown Food Security Report co-authored by Angela Ho and Alan Chen published this past August.

The topline finding is a jaw dropper:

50% of Chinatown’s fresh food stores—greengrocers, fishmongers, barbecue meat shops, and butchers—have been lost between 2009 to 2016.

The gap comes down to how food assets are defined and whose food system and food security is being considered.

Chinatown’s food retail landscape has provided food access and a sense of community to residents and visitors for generations while offering culturally specific foods at affordable costs. However, cultural food assets do not usually figure into how policy frames the local food system. 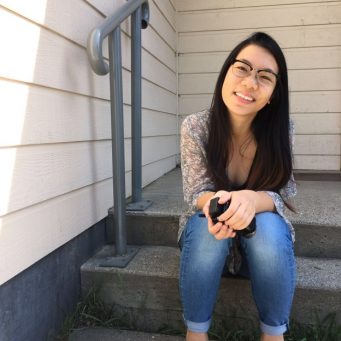 The Chinese food distribution system represents a “parallel food system”, operating outside and in parallel to the mainstream local food movement. It represents one of the many pathways through which food moves from local farms to consumers.  It’s proven to be a creative and resilient response to systemic racism and segregation that’s been socially enforced and entrenched in policy directed at Chinese-Canadians since the 19th century.

The report opens up the conversation about the food movement and food security in Metro Vancouver in a critical way as Angela explains:

We were able to discuss this lesser known history within food security discourse. If you look at what the City of Vancouver is promoting through local food, it’s very white. Being able to share this less known history and open up how we talk about  local food it’s very important. These discourses aren’t happening at a local level.

Angela got started in food systems work in her high school garden club. Environmental and sustainability issues were on the table but racism, culture, identity were not. “When I heard about the Hua Foundation and how they were doing sustainability and food security work in a way that focused on culture with an intersectional approach, it drew me in.”

Leading up to the report launch, the Hua Foundation ran the Choi Project (choi is Chinese for vegetables or leafy greens) which empowered families and communities to take part in the local food movement. The project partnered with small businesses, created the Seasonal Choi Guide, and offered delightful workshops like Cooking with G-Ma, to teach participants “how to prepare traditional Chinese dishes that are locally sourced, healthy, and approved by Grandma”.

Cultural food assets are also very valuable learning spaces. For the workshops we host, we bring people in and show them how to shop at the greengrocers. People working at the stores will teach participants what’s in season, how to use the different produce, and so on. There’s a lot of knowledge spontaneously being shared in these spaces that’s very valuable. What we recognize as culture, especially in policy, is often the tangible – building and monuments – when really culture is also the intangible – the knowledge, values, and skills, how you cook food, come together, and eat.

Over the last six months since the report’s release, the findings have helped to shift municipal policy. In an update on the Vancouver Food Strategy in October, the report’s findings were cited and City Council passed recommendations to include culture in the understanding of food assets, to focus on preserving healthy affordable food retail, and to  broaden the voices heard in the process of creating food policy.

Angela says that the Hua Foundation’s work “is not just for policymakers and institutions but for the community. It’s knowledge for them to leverage their interests in protecting Chinatown. It’s giving back to our community. My intention in writing the report was to make policy as accessible as possible and know how to critique it.”

While the work focuses on Chinatown, the issues, framework, and critical questions raised are  relevant for food security work throughout the province. “It’s important to recognize that there are other ways of doing food work and there always has been. I don’t just want Chinese-Canadian narratives to be acknowledged. We need to challenge the overall whiteness of local food efforts and recognize the important work of racialized and Indigenous peoples locally and provincially.”

Writing this report was a lot of emotional and racialized labour, having to point out the flaws in the system, that is something that People of Colour and Indigenous people have always had to do. I feel it’s unfair it’s still happening and we still bear the brunt of the labour. But if we didn’t do it, no one else would be calling institutions out. It’s an interesting paradox. We have to do it but it also sucks as a POC to be doing that work. What we leave behind with the report is to challenge people who are in positions of power to consider what’s not being included, provide a framework for that, and ways to consider these alternative often peripheral experiences. It’s about challenging the narratives of how we understand local food.

For those in the Metro Vancouver area, Angela will be part of an event January 20 discussing the findings of the report on a panel entitled Food Security, Culture, and Urban Development in the Context of Vancouver’s Chinatown. 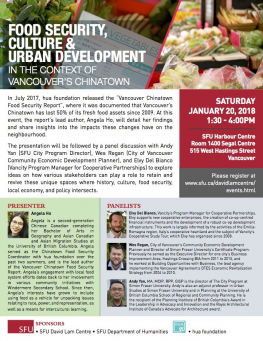