Wicked Questions at the Intersections of Poverty Reduction, Food Insecurity, and Indigenous Food Sovereignty in BC

Last month, we featured a snapshot of a co-presentation by Trish Garner of the BC Poverty Reduction Coalition, and Melanie Kurrein who manages the Provincial Health Services Authority’s food security mandate on poverty reduction and food insecurity in BC.  With the Communty of Practice, they discussed the forthcoming BC Poverty Reduction Plan and the recent Food Costing in BC work. 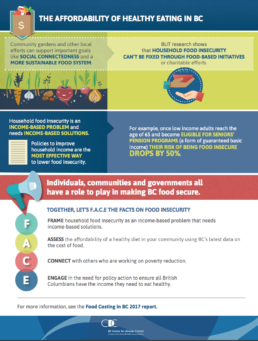 Trish and Melanie’s conversation uncovered some big wicked questions underpinning community food security work across BC, which the CoP further explored in a follow-up session.

Wicked Questions are a tool to uncover and name the tensions and paradoxes of our practice, asking “What opposing- yet complementary- strategies do we need to simultaneously pursue to be successful?”

Laurie Gallant with the Northwest BC Food Action Network opened the discussion with a question on whether the farmers market nutrition coupon program addresses household food insecurity. The program provides coupons for low income families to shop at farmers markets.  As a farmer herself, would like to see the program grow and consider expanding to include farmgate sales. PHSA partners on the program, and Melanie explained that it’s important for us to explore together how our programming is making a difference. The Farmers’ Market Nutrition Coupon Program is described as a healthy eating initiative that supports farmers’ markets and strengthens the food system. However, it’s not meant to address the root causes of household food insecurity which is a problem of income.

Melanie responded similarly to Grant Rice of the Surrey White Rock Food Action Coalition who asked about question about the role of universal school meal programs and food rescue legislation (as for example in France where having legislation means businesses are fined if they dispose of good food) in addressing food insecurity. Together the COP began to explore the impacts of these programs in terms of building a more just and sustainable food system, but not necessarily able to directly address food insecurity. 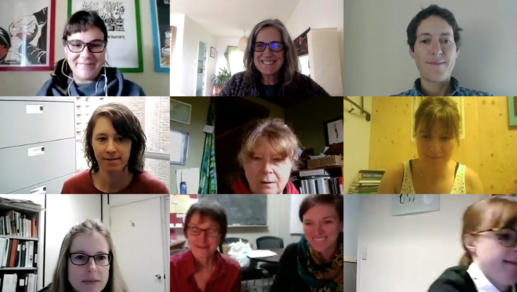 A few members of the Community of Practice meeting online

Supporting agriculture and affordability were also top of mind for Ava Reeve with the Langley Healthier Communities Partnership. She named a paradox between the need to increase wages for farmworkers and food costs.

Reflecting on some of these tensions, there is a wicked question that asks, How can we simultaneously increase the minimum wage for farmworkers, support agriculture and farmers markets while ensuring food affordability?

Trish points out that there are farmers- many of them relatively small operations- who do pay living wages. This surfaced in the Fair Wages Commission  who talked to low wage workers and advocates around the province. For now the provincial government hasn’t included farmworkers in the living wage, so there is, in Trish’s opinion, room for more education and advocacy on this issue.

The focus on wages continued with Denise Gagnon, also with the Northwest BC Food Action Network, who asked about the provincial Basic Income Commission, a three-person commission currently traveling the province and collecting online feedback until February 15. We had previously spoken with Trish about a basic income as a poverty reduction measure which has mixed support across the Poverty Reduction Coalition.

The good thing is, if it was set at an adequate level, people would have the income they need to meet the cost of living, and people wouldn’t have to jump through the hoops and stigma of income assistance. But, there is a concern that a government could use it as a way to step back from other investments in health care, childcare, and education, for instance. Trish Garner

There is also concern that it would incentivize low wage employers to keep paying workers poorly under the premise that the government would ‘top them up’. And so, there is a wicked question swimming in the basic income conversation around, How do we simultaneously encourage government investment in a basic income without incentivizing a reduction in social investments and low wages?

Indigenous food sovereignty and land rights were also on CoP members’ minds. Bonnie Klohn from the Kamloops Food Policy Council mentioned Nourish- their upcoming household food insecurity forum- and some of the questions she’s working through in planning that event. Bonnie points to the tensions present when we frame food security in terms of access to food. While going to the food bank  improves an individual’s access to food they couldn’t otherwise afford, Bonnie raises that most food security/policy organizations operate on unceded Indigenous territory. And so this access reinforces the dispossession of land and Indigenous people’s access to their  traditional foods from the land.

This might be one of the wickedest questions of the current moment in BC’s food movement, How can we simultaneously support Indigenous food sovereignty efforts while working on unceded territories within colonial structures? 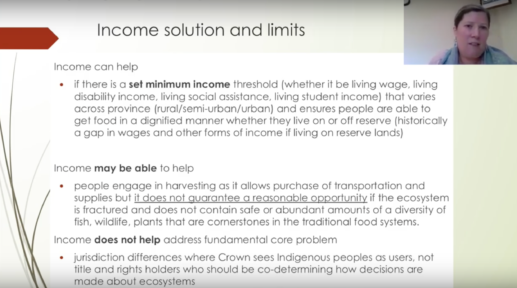 The approach of colonial governments is sometimes to find a single solution or focal point with which to address issues. The focal point of income has been present in professional circles and within government. There’s been major income advocacy- which is important and needed. But the question is really, how will an income solution to food security ensure the ability of Indigenous peoples to harvest Indigenous foods? Suzanne Johnston

Trish added that even within an income-based focus, there were eight Indigenous leaders as part of the advisory for the BC Poverty Reduction Plan:

They really made the point that when talking about food insecurity with Indigenous communities – especially in rural and northern areas – we’re talking about something quite different from what we’ve been discussing here [and in southern/urban communities] which is the income-based notion of food insecurity. The government doesn’t know what to do about those really big issues around access to land, the displacement, and ongoing colonization of our current day practice. Trish Garner

Pulling it all together, some of the wicked questions we generated in the conversation are re-captured below.

How can we simultaneously increase the minimum wage for farmworkers, support agriculture and farmers markets while ensuring food affordability?

How do we simultaneously encourage government investment in a basic income without incentivizing a reduction in social investments and low wages?

How can we simultaneously support Indigenous food sovereignty efforts while working on unceded territories within colonial frameworks?

Looking back at the intent of wicked questions- to reveal opposing-yet-complementary strategies we need to pursue- we can begin to consider how act within the complexity. We’ve been trying out another  Liberating Structures in the CoP called  15% Solutions. The goal is to identify your 15%- the actions you can take  right away without further resources. We invite you to ponder these questions, to generate your own,  and consider your 15%.