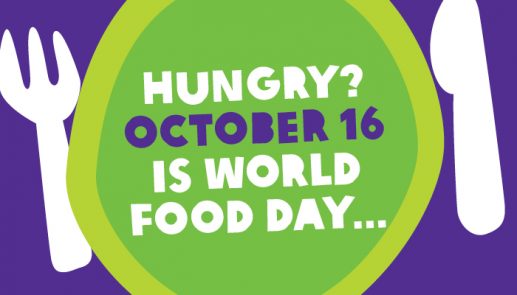 Monday, October 16th will mark the 72nd World Food Day. World Food Day has Canadian origins as it was established at a 1945 assembly in Quebec to mark the founding of the Food and Agriculture Organization of the United Nations. Each year it is celebrated to mark this occasion and “to promote worldwide awareness and action for those who suffer from hunger and for the need to ensure food security and nutritious diets for all.” [1] Langley, BC, hosts the largest World Food Day celebration in Canada.

“When we hear these statistics, we may think that the price of food is the issue,” said Tania Morrison, Provincial Manager, Food Security, BC Centre for Disease Control. “However, although prices may be increasing, food in Canada is relatively cheap compared to other parts of the world, and food expenditure comprises only a small proportion of total spending of average Canadians households – about 10% in 2015. For families of low income, being able to afford a healthy diet is challenging or impossible and can require a significant proportion of household budgets.”

An indicator of food insecurity in BC is a household’s ability to afford healthy, safe, and culturally appropriate food. Calculating the cost of the National Nutritious Food Basket provides insight into the income required to be able to eat a nutritionally adequate diet. The Provincial Health Services Authority collects, analyzes and releases this data every two years in collaboration with the regional health authorities and Ministry of Health. Data from 2017 will be released in early 2018.

Over the past six years, the cost of a nutritious food basket across the province has been rising but incomes have not kept up. Some other key facts about food insecurity in BC include:

The idea of a Basic Income Guarantee (BIG) program is gaining traction as a tangible solution to poverty inequity in BC and other areas in Canada. A BIG ensures that everyone has unconditional access to an adequate income to meets basic needs and enables a dignified human experience regardless of work status. [6]

Ontario piloted its own BIG program earlier in 2017 setting a precedent for other provinces to do the same. Following suit, the newly elected BC NDP government has committed to also testing a basic income pilot. We are excited to see what lies ahead.

As this year’s World Food Day approaches, we must remember that BC has a role to play in setting a global example for what it looks like to bridge from community food security into poverty reduction, to create a future where all families can afford to consume a healthy diet.

PROOF Food Insecurity and Policy Research at University of Toronto

[3] Ibid. [4] Ibid. [5] Ibid. [6] Dietitians of Canada. (2016).  Addressing household food insecurity in Canada: Position statement and recommendations from Dietitians of Canada. Toronto, ON.  [7]  2017 Confidence and Supply Agreement between the BC Green Caucus and the BC New Democrat Caucus.
This entry was posted in Food Insecurity, Poverty, Uncategorized and tagged basic income guarantee, cost of eating, world food day. Bookmark the permalink.

If you have an idea for a homegrown story, please contact us.